skip to main | skip to sidebar

Time out from cooking for a girl from Pumpkin Town.... 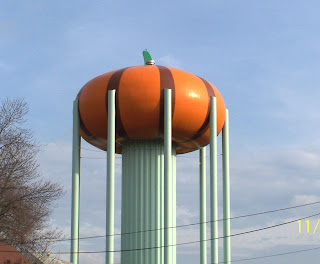 Not really Pumpkin Town...my hometown is actually Circleville, Ohio....home of the Circleville Pumpkin Show. The oldest and largest fall festival in Ohio and also claimed to be (by Circleville natives and others) "The greatest free show on earth". Above is a photo of the "pumpkin" water tower visible from my parent's house (5 miles outside of the city).

The Circleville Pumpkin Show is a 4 day festival held in downtown Circleville the third week of October from Wednesday to Saturday. The streets of the city are closed to allow for booths, rides, displays, crafts, and over 300,000 visitors. For a city with a population of 12,000...that is a lot of visitors!

There is so much to see and do. In the center of the town is the pumpkin tower. It displays more than 100,000 pounds of pumpkins, squash, and gourds. There is a contest for the largest pumpkin. In 2007, there was a record winning pumpkin. This pumpkin weighed in at 1524.5 lbs! (See photo below) 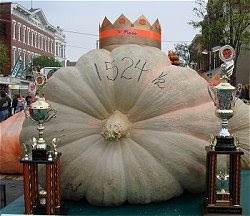 My favorite display is the was once called “The World's Largest Pumpkin Pie”. (Rumor has it a group in California made one bigger, but we don't like to talk about that in Circleville. :) )
This huge pumpkin treat is baked annually for the Pumpkin Show by Lindsey’s Bakery on Main Street in Circleville, Ohio. This pie is 14 feet in diameter and weighs over 400 pounds. Want to try and make it at home? :) 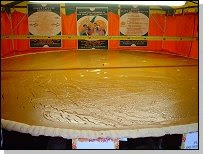 That is a lot of pie!! The first time we went to the pumpkin show my husband asked if they slice the pie and serve it. Yuck! I doubt it. The pie sits out for a couple weeks before it is feed to local live stock. Besides, I'm not sure I would want to eat a pie that has been sitting out for 300,000 people to hold their faces over :)


On the topic of pumpkin treats, there are a variety of interesting foods available at the Pumpkin Show that go beyond pumpkin pie. Such as....Pumpkin Burgers, Pumpkin Pizza, Pumpkin Chili, Pumpkin Pancakes, Pumpkin Donuts, and Pumpkin Ice Cream to name a few.

My favorite pumpkin treat is the Pumpkin Roll. This year my mom bought a whole frozen one for me to bring to my husband (who was working) and for us to enjoy for weeks after the Pumpkin Show. :) (Thanks, Mom!) 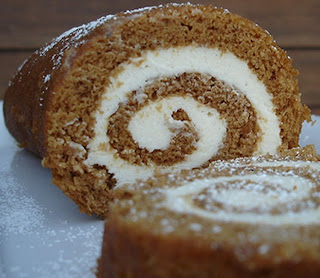 I have great memories from childhood to high school years at the Pumpkin Show. Now I enjoy seeing old friends who return to visit and running the Pumpkin Classic. A 5 mile run held on the Saturday morning of Pumpkin Show.

I encourage anyone who likes fall festivals to visit. :)
Posted by Ashleigh at 6:43 AM 1 comment: 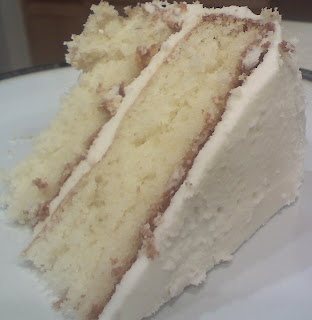 Today was Chris' 24 hours off this week and since it was dark and rainy outside we spent a cozy day inside. I decided to brighten our day with cake. This was the best from-scratch cake I've made. I found the recipe on a foodnetwork.com search just before making it.

Please disregard Chris' fork marks in the photo :) He was literally standing over me begging me to give him his piece of cake back.

Directions
Pre-heat the oven to 325 degrees. Grease and flour 2 (9)-inch round pans. Sift together the flours and baking powder.

Cream the butter and sugar in a large mixer bowl until fluffy. Add the salt and vanilla and mix well. Add the eggs, scraping the sides of the bowl, and mix until light and fluffy. Add the flour mixture in 3 batches alternating with the milk, mixing after each addition and ending with the flour. Mix just until combined. Do not overmix.

Pour the batter into the prepared pans. Bake 30 to 35 minutes or until a toothpick inserted in the center comes out clean. Cool the cakes in the pans on wire racks for 15 minutes. Invert the cakes onto the racks and remove the pans. Let the cakes cool completely. Wrap and refrigerate before decorating.

Place butter and vanilla in a mixing bowl. Using a hand or stand mixer, gradually mix in the sugar, and when it starts to get thick, incorporate milk one tablespoon at a time until all of the sugar is mixed in and the frosting is thick and spreadable. Beat for at least 3 minutes for it to get good and fluffy.
Posted by Ashleigh at 6:22 PM 1 comment: 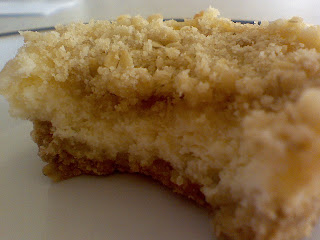 This is one of the first recipes I have "created" based on necessity. :) I really wanted cheesecake, but I only had 1 egg, 1 block of cream cheese, no sour cream, and no graham cracker crumbs. Not a good start, right? After searching the Internet for a recipe I decided to combine various ideas found on Food Network and Allrecipes to create these delicious treats!

These only get better the longer they sit…but good luck keeping them around :)

*Turning the oven off and leaving the cheesecakes inside will allow the filling to harden without over cooking your crusts.
Posted by Ashleigh at 1:24 PM 2 comments:

Get Involved! Become A Volunteer 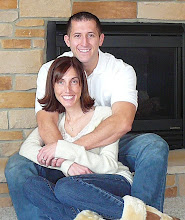